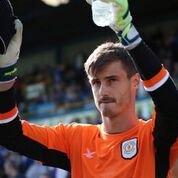 Former Crewe Alexandra striker Tom Pope scored the only goal against his former club for Port Vale as the Valiants completed their first league double over the Railwaymen since the 1995/96 season at Vale Park yesterday afternoon.

Manager David Artell made 3 changes from last Saturday’s 3-1 home defeat to Cheltenham Town as the line-up reverted back to the one that beat Mansfield Town away from home the previous Saturday. Nicky Hunt replaced the suspended George Ray at centre-back whilst James Jones and Ollie Finney replaced Callum Ainley and Charlie Kirk in the wide midfield positions.

The opening chance of the game came in the 22nd minute with Vale midfielder Tom Conlon had an effort saved by Garratt before the Alex number 1 denied Anthony Kay from the resulting corner. Another superb save denied Conlon again a few minutes later before Paul Green and Chris Porter both headed chances from Nathan Smith and Manny Oyeleke while the first Alex chances came 3 minutes before the break with Smith clearing Jordan Bowery’s effort off the Vale line.

The second half continued in the same vein with Cristian Montano forcing Garratt into a save before Porter headed a James Jones cross wide at the other end. Vale had the better chances in the final 20 minutes with Kay hitting the side-netting following a deflection before the game-winner came with 12 minutes left to play with Pope finishing with his left foot from 12 yards out before David Worrall had an effort that was saved by Garratt.

We have 2 home games coming up as we host Notts County next Saturday before Yeovil Town travel north on Good Friday.

It’s a good job that we have the number of points that we have as the slim playoff push is definitely over now and, unlike the past few years, don’t have to look over our shoulders towards the relegation spots and have the opportunity at looking at some of the younger lads like Travis Johnson (who has made the bench this season), Owen Dale and Tom Lowery and see how they react to playing games at this level ahead of them potentially being involved on a more regular basis next season.