Finally Scored But Still Pointless On The Road 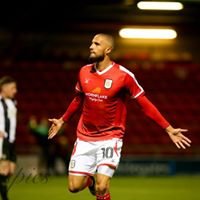 Crewe Alexandra’s first goal away from home in the league was not enough as Notts County recorded their first victory of the season in all competitions at Meadow Lane yesterday afternoon.

Manager David Artell made 3 changes to Tuesday’s home defeat against Manchester City’s Under-21 team in the EFL Trophy as James Jones and Charlie Kirk replaced Ollie Finney and Callum Ainley in midfield and Alex Nicholls came in up front for Shaun Miller as Artell moved from a 4-4-2 formation to a 4-3-3 with Nicholls and Kirk either side of Jordan Bowery.

Like in Tuesday night’s game, the Alex found themselves behind inside the opening 5 minutes as Jon Stead’s cross was turned in by Rob Milsom before the Alex leveled the game on 14 minutes as Corey Whelan’s right-wing cross was finished on the turn by Bowery. The Notts goalscorer should have been sent off for a knee-high foot that took down Nicholls whilst the hosts took the lead again when Elliott Hewitt headed home from Cedric Evina’s left-wing cross on the hour mark.

The Alex host Swindon Town in the league on Tuesday night before a trip to Grimsby Town next Saturday.

In a season where we’ve been alright defensively, it was a case that we let in two relatively soft goals from crosses where we needed to pick up runners coming into the area (that’s taking nothing away from the great delivery from Evina for the winner). Going forward, it’ll be interesting to see whether we continue with playing with 3 central midfielders away from home which would probably be a better option as long as the striker has support in attack whether that’s from the midfield or the 2 wider forwards.