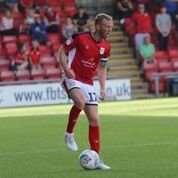 Crewe Alexandra have announced their retained list in the last hour following yesterday’s announcement that we have been promoted into League 1 for next season.

The experienced duo of Paul Green and Nicky Hunt are the most high-profile players that have been released from their deals with Academy Alumni quartet Shaun Miller, Lewis Reilly, Connor Heath and Aaron Lomas also not offered new deals. Loanees Chuma Anene, Michael Nottingham and Stephen Walker have all returned to their parent clubs.

Oliver Finney, Owen Dale and Josh Lundstram have all had the options on their contracts taken up while 9 players have been offered new deals including Tyreece Onyeka, Joe Robbins and Nathan Woodthorpe who have all been offered their first professional contracts.