Another Win, Another Clean Sheet At Home…Are We At The Wrong Ground? 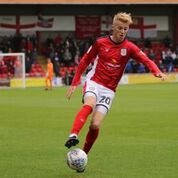 A Charlie Kirk goal on the half-hour mark was enough to give Crewe Alexandra their first victory over Swindon Town in 10 meetings at the Alexandra Stadium last night to give the Alex a fourth clean-sheet at home in the five games played there.

Manager David Artell made 3 changes to Saturday’s 2-1 defeat at Notts County with Nicky Hunt replacing the injured Perry Ng at centre back, Callum Ainley replaced Tom Lowery in midfield whilst Chris Porter came in for Alex Nicholls up front.

Kirk had the opening chance of the game in the fourth minute as he was put through by Ainley with his shot saved at the second attempt by Luke McCormick in the visitors’ goal before Keshi Anderson was denied by Ben Garratt at the other end 4 minutes later. The goal came on the half-hour mark as an Ainley shot was blocked with Kirk turning in the rebound after left-back Joe Romanski played everyone onside.

After a double-change from Swindon just after half-time, including the right-back who was replaced after Kirk had him confused on how to deal with him, the chances still came Crewe’s way as Ainley tested McCormick from distance before Kevin O’Connor also tested the keeper from outside the area. The best chance for Swindon came with 10 minutes to go as Steven Alzate cut in from the right and his driven shot hit the base of the post but the hosts held on despite a late barrage of pressure.

The Alex travel to Grimsby Town on Saturday for our next game before hosting Bury a week on Saturday.

It was vital that we got something out of this game seeing as we face leaders Lincoln on Saturday and also to break the winless run against Swindon. It was interesting that we started with both of the big lads but played Bowery from a wider position but Artell’s tactics were spot on against this team on that night. If I was scoring the players then none of them would get less than a 6 and both Kirk and Hunt would be much higher. More of the same on Saturday please guys.