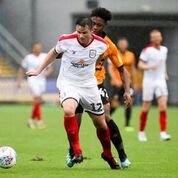 Here are those players that have worn the number 6 shirt in competitive games since squad numbers were brought into the Football League in the 1999/2000 season.

The first player to wear the number was then-club captain Steve Macauley. After joining the club for £25,000 from Fleetwood Town in March 1992, he made over 300 appearances for the club for joining Rochdale in the summer of 2002. He spent 3 spells on loan at Macclesfield Town (between his latter days at the Alex and during his first season at Rochdale) before joining them permanently in March 2003 then would play for Bamber Bridge and retired in the summer of 2005, joining Fleetwood as a physio and would have a short spell as caretaker-manager in September 2008.

The second player is Academy graduate Foster who made his debut for the club in 1998 as he established himself as a regular during the 00/01 season. He made almost 250 appearances for the club before joining Burnley in the summer of 2006. After spending one season at Turf Moor, he would play for Barnsley for 6 years and had a short spell at Tranmere Rovers before retiring in early 2014.

Like Cox, we covered Baudet’s career in yesterday’s column with him taking the captaincy following Cox’s retirement in June 2008.

The next player was Ada who joined from non-league Histon in the summer of 2009 and made over 60 appearances in his 2 seasons with the Alex. After leaving the club, he played for Kilmarnock, Burton Albion and Ebbsfleet United before being sentenced to five years in prison in December 2012 after being convicted of rape.

The likeable Scouser re-joined the club in the summer of 2010 following 3 years in non-league football and made almost 150 appearances before leaving for Tranmere Rovers (who he spent a month on loan during the early part of the 13/14 season) in January 2015. He would also play for Morecambe, Eastleigh, Southport and Macclesfield Town before he retired in 2018.

The left-footed defender joined the club in the summer of 2015, making over 60 appearances in his 2 seasons with the Alex. He joined Gillingham after leaving Crewe for a season and spent the last couple of seasons at Stevenage, who he left earlier in the summer.

The penultimate player is Raynes who joined the club as Nugent’s replacement along with the final number 6, making 40 appearances in his time with the Alex without shining for the club. He joined current club Hartlepool United, initially on loan, in January 2019 before making the move permanent in the summer.

The Irishman is the current player to wear the number and has made over 100 appearances in his 3 seasons with the club. His deal runs until next summer although it’ll be interesting to see whether his injury problems from the last couple of seasons are behind him or not.