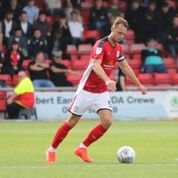 Today we look at those players who have worn the number 5 since squad numbers where brought in by the Football League for the 1999/00 season.

The first player on the list is Walton who became the club’s record signing in October 1997 when he moved for £500,000 from Shrewsbury Town. He made over 150 appearances for the club before leaving for Derby County in the summer of 2003 and would play for Stockport County and Shrewsbury before retiring in 2005.

Next came Moses from Huddersfield Town in the summer of 2003, making over 60 appearances for the club at either centre-back or right-back in his 3 years at the club. After leaving the Alex, he would play for Lincoln City, Mansfield Town and Gainsborough Trinity, also being appointed as caretaker manager for the last 2.

The third player saw Frenchman Baudet join the club in the summer of 2006 from Notts County. He would make over 100 appearances in 3 seasons for the club (being named as captain in his final season after the next man left the club). He would also play for Colorado Rapids and hometown club Grenoble Foot as well as manage 7th-tier AC Seyssinet in his homeland.

The former England Under-21 international was next to wear the number 5 as he swapped numbers with Baudet for their second season at the club. He would make over 60 appearances in his spell with the club before retiring at the end of this season following a career that started in 1990. He would come out of retirement for 4 games as player/manager at Leek Town in the 2010/11 season and would be named as Neal Ardley’s assistant at AFC Wimbledon in October 2012 and followed him to Notts County in November 2018.

The St. Helens-born defender joined the club initially on loan from Liverpool in the summer of 2006 before making the move permanent the following summer. He made over 100 appearances in his 4 seasons at the club and would play for Shrewsbury Town, Stockport County, Barrow, Ballarat Red Devils in Australia, Workington and Warrington Town before retiring in 2016.

The current Alex manager was the next player, having arrived from Morecambe on a free transfer, making over 80 appearances in his 2 years at the club including gaining promotion as captain via the play-offs in his final game. After leaving the Alex, he joined Port Vale but left before the season started and would also play for Northampton Town, Wrexham, Bala Town, Port Talbot Town, Kidsgrove Athletic and Droylsden. He would become Academy Operations Manager at the Alex while playing for Bala in July 2014 before becoming manager in January 2017.

The penultimate entry on this list is Ray who made his debut at Wembley in the EFL Trophy win back in 2013 before establishing himself in the team in the 14/15 season en route to making over 150 appearances at the club, captaining the side in his final season. He joined Tranmere Rovers last season who were relegated back into League 2 and he’s contracted until next summer.

The current occupant of the shirt joined the Alex last summer from Swindon Town but has only made 6 appearances following injury problems. We’ll see whether his performance levels were due to a lack of ability or missing most of the last pre-season when he gets fit ahead of next season.