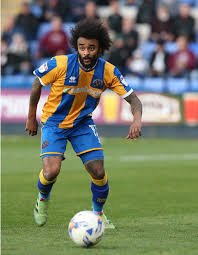 Coventry City have completed the signing of Shrewsbury Town left-back Junior Brown on a 2-year deal, upon the expiry of his current deal at the end of the month.

Brown, 29, started his career with the Alex making one solitary appearance off the bench in a game against Brighton & Hove Albion in February 2008 before joining F.C. Halifax Town in that summer. After a spell with them and Northwich Victoria in non-league, he joined Fleetwood Town and was part of their squad that won promotion into the Football League during his second season at the club. He left Fleetwood in 2014 and after short spells at Oxford United and Mansfield Town (who he joined firstly on loan then permanently), he signed for Shrewsbury Town in the summer of 2015.

As well as playing at left-back, he can also play as a winger on the left-side which he where he started his career at Crewe.