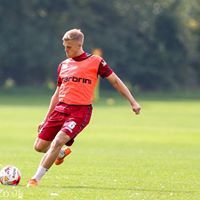 Grimsby Town have completed the signing of former Crewe Alexandra captain Harry Davis on a 1-year deal with the option of a second, the club confirmed earlier. Davis had announced to his former club St. Mirren that he would like to move back to England due to personal reasons.

Davis, 26, is a centre-back who came through the Alex Academy and made his debut for the club as a substitute in the final game of the 09/10 season against Bradford City but became a regular at full-back under first Dario Gradi then father Steve 2 seasons later before moving to his natural position the following season.

Whilst at the club, he was part of 2 Wembley victories in the League 2 play-off final against Cheltenham Town in 2012 and a EFL Trophy victory against Southend United the following year before he left weeks after his dad was sacked as manager in January 2017.

He joined St. Mirren initially on loan in the winter window before making the move permanent last summer after impressing in the Scottish Championship. During last season, he made 20 league appearances (scoring 3 times) as St. Mirren won the Championship with the club promoted back into the Scottish Premier League.

Picture taken by Nicola Cooper whose professional photography website can be found here.