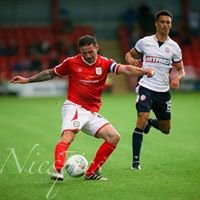 Bury have completed the signing of former Crewe Alexandra forward Chris Dagnall on an initial 1-year deal, joining former strike partner Ryan Lowe, who is the manager of the Shakers. He becomes the third signing for the summer for the Gigg Lane club after midfielder Nicky Adams and former Alex winger Byron Moore.

Dagnall, 32, started his career at Tranmere Rovers where he made his debut aged 17 before joining Rochdale, initially on loan in January 2006 then permanently in the summer where he spent 4 years. After spells at Scunthorpe United, Barnsley and Leyton Orient as well as loan spells at Bradford City and Coventry City, he moved abroad to play for Indian Super League club Kerela Blasters in the 2015 season then Hibernian before joining the Alex in 2016. He was appointed captain after David Artell took charge in January 2017 before George Ray was appointed skipper after recovering from his long-term back injury.

As well as Lowe and Moore, he joins former loanees Greg Leigh and Harry Bunn that have played at the Alexandra Stadium that are on the Gigg Lane playing staff.