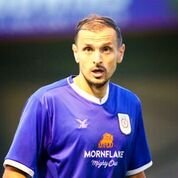 Crewe Alexandra have announced the signing of forward Alex Nicholls on a 1-year deal this afternoon, becoming the third signing of the summer after Paul Green and Shaun Miller.

Nicholls, 30, started his career at Walsall making his debut in the FA Cup 2nd Round against Yeovil Town in December 2005 and made over 200 appearances in all competitions (both as a striker and as a wide-man) before joining Northampton Town in 2012. After a spell at Sixfields and 2 loan spells to Exeter City, he joined the Grecians on a permanent deal in January 2015 and made 74 appearances (including his loan spells at the club). He joined Barnet 2 summers ago and spent 6 months at Dundee United, during which he won the Scottish Challenge Cup.

When asked what Crewe fans should expect from Nicholls, here is Harry Reynolds’ response:

Solid player. 7/10 every week. Composed on the ball. No real pace but a very good finisher if given the chance in front of goal. Was often on the wing for us, but looked better when up front or behind the striker