Alex Move Into Top Half Following Win At Oxford 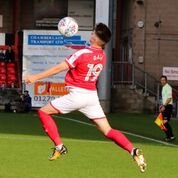 Goals from Mikael Mandron and substitute Owen Dale saw Crewe Alexandra defeat Oxford United at the Kassam Stadium, a result that sees the visitors move into the top half of the table.

The opening chance of the game came in the 4th minute as Oli Finney had an effort that was blocked following good work down the left before the first real chance came 20 minutes later as Tom Lowery missing the target from inside the area.

The opening goal came just before the half-hour mark saw Pickering, Kirk and Finney combine to see the midfielder fire the ball across with Mandron knick the ball ahead of the defenders and past Simon Eastwood in the home goal before the visitors should have doubled the lead 7 minutes before the break after Finney’s interception allowed the goalscorer in behind but the Frenchman hit his shot over the bar.

After an early double-change from Karl Robinson which saw Sam Winnall and Jordan Obita come on, the hosts got themselves back into the game with Olamide Shodipo getting more of the ball after switching wings to the right putting in a dangerous cross. The Alex could have had a late penalty as a corner was headed goalwards with Eastwood making a good save with James Henry clearing the rebound off the goalline from Mandron before Luke Murphy had an effort that went just past the post. The second goal came in stoppage-time with substitute Callum Ainley finding Dale to fire in off the post.

The next games for the Alex see us travel to Portsmouth on Saturday before a trip to Accrington Stanley next Tuesday.

It was another game that saw us get exactly what we deserved out of it against a team that looked a long way away from the side that lost in the play-off final at Wembley back in August. Our play down the left in particular from Pickering, Kirk and Finney (the latter picking up large pockets of space in the opening period against a largely absent midfield) gave the Alex a platform to build on while the defensive side of the game that we saw on Saturday in the second-half was repeated again tonight as we haven’t conceded more than one goal in the league since the opening game against Charlton over 2 months ago.