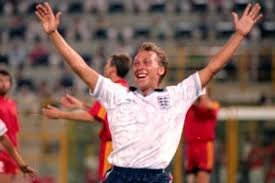 As a little over a month ago, I looked at a combined Republic of Ireland & Northern Ireland XI on St Patrick’s Day, I’ve compiled a similar team for England to celebrate St. George’s Day – same rules apply where they have to have made an appearance for the Alex first team but don’t have to make a senior appearance for England.

The goalkeeper of this team is the first of the one-cap wonders (at least so far in Ruddy’s case even if it’s unlikely that he’ll be capped again) having made his appearance in 2012. He started his career at Cambridge United in 2004 before a move to Everton a year later, where he joined several loan spells including one at Crewe Alexandra for the second half of the 08/09 season. Since leaving the Alex, he made one appearance for Everton’s first-team as well as a loan move to Motherwell and permanent transfers to Norwich City and current club Wolverhampton Wanderers (who he joined in the summer of 2017).

Rob is the first of the players that have played more than once for his nation, having appeared 8 times between 1992 and 1995. After leaving the Alex, he made almost 250 appearances for Liverpool before making one appearance for West Ham United in 1999 in the Intertoto Cup. He is currently an academy coach at former club Liverpool.

Neil made 6 appearances for England’s Under-21 team during 1993 and 1994 but didn’t get a full cap for England. He started his career with Scunthorpe United before spending time in the top tier with Aston Villa, Middlesbrough, Bolton Wanderers and Watford. He would join Crewe in 2006 after a year at Cardiff City and would captain the Alex before starting his coaching career. He would be appointed Leek Town manager in late 2010 (where he would also play 5 times for the club following an injury crisis) before spending 6 years as Neal Ardley’s assistant at AFC Wimbledon.

Nicky made 9 appearances for the Under-21s in 2004 and 2005. He started his career at Bolton Wanderers where he made over 100 appearances in the Premier League before spells at Birmingham City and Derby County, both on loan, then permanent transfers to Bristol City, Preston North End, Rotherham United, Accrington Stanley (after an initial loan spell), Mansfield Town, Leyton Orient and Notts County before joining Crewe in the summer of 2018.

Seth makes it into this team as a defender due to him making his solitary England appearance in 2000 as a left-back in caretaker Peter Taylor’s only game in charge of England before Sven-Goran Eriksson took over. He made 91 league appearances for the club for 2 spells at Derby County either side of a spell at Leeds United before retiring at the age of 28 due to knee injuries in 2007.

Geoff made 9 appearances for the England senior team during 1991 and 1992. He started his career with Rochdale before playing 125 times in the league during his first spell with the Alex. After that he played for Crystal Palace (including captaining them in the 1991 FA Cup final), Wolverhampton Wanderers, Nottingham Forest, Barnsley and Notts County before playing his final season back at the Alexandra Stadium. Since retiring, he was diagnosed with Leukaemia and has raised millions of pounds for charity.

Danny was another that made 9 appearances for the senior team between 2001 and 2003, scoring against Paraguay in April 2002. Having started his career with the Alex, he made his debut for the Railwaymen in 1993 at the age of 16 before a move to Liverpool in 1997. After initially struggling to get into the team at Anfield, he returned to the Alexandra Stadium and established himself in the 2nd tier. After 7 years at Liverpool (where he won several trophies), he also played for Charlton Athletic, Tottenham Hotspur, Fulham and Blackburn Rovers before retiring in 2013. He currently works as a TV pundit for the BBC.

The final midfielder sees former England captain Platt make the team with him getting 27 goals in his 62 full caps. He joined Crewe from Manchester United in 1985 after failing to make an appearance for their first team and spent 3 years with the Railwaymen. He then joined Aston Villa and also played in Italy for Bari, Juventus and Sampdoria before returning to England to play for Arsenal (where he won the double) and Nottingham Forest, where he was player/manager. Since retiring from playing, he has also managed former club Sampdoria, England’s Under-21s, coached at Manchester City and managed Pune City in India.

Dean made his one and only appearance for the England senior team in the summer of 2008 against Trinidad & Tobago under Fabio Capello, more than two years after his first international call-up. Having made his Alex debut at the age of 16 back in 2000, Dean made 177 appearances for the Railwaymen before a year at Premier League Norwich City then a move to West Ham United (including scoring in the 2006 FA Cup final). Another who had to retire early due to injuries, Ashton has moved into TV punditry.

Stan made 5 appearances for the England senior team between 1974 and 1977. Stan started his career with Manchester City before a short spell at Bury. He joined the Alex in 1970 in the 4th tier, spending 18 months here, before moving to Carlisle United in late 1971. He spent 7 years at Queens Park Rangers before spells at Nottingham Forest, Leyton Orient and 2 separate spells at Brentford. Since retiring, it was revealed that he was suffering from Alzheimer’s disease.

John is the odd one out of the list with his England cap occurring whilst at the club in 1892. His Alex career saw him make 14 appearances for the club before becoming a referee (and officiating in the 1911 FA Cup final) while his full-time career outside football saw him work on the Railway until retiring in 1930, a year before his death.