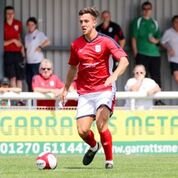 Here are those players that have worn the number 4 shirt in competitive games since squad numbers were brought into the Football League in the 1999/2000 season.

The current assistant manager was the first player to wear the shirt as Dario Gradi would regularly play him as one of 3 central midfielders in a similar formation to the one we currently play. He made over 400 appearances in all competitions for the club, including a spell as club captain, before playing for Sheffield Wednesday, 2 loan spells back with the Alex, Hereford United and Bala Town.

We covered Billy’s career in the number 2 column but he was given the number 4 after he spent most of the previous season in central midfield but would move to left-back following the arrival of Tony Grant to the Alex in January 2006.

Another academy product would take over the shirt after Roberts had established himself as a first-team regular the previous season. He made over 100 appearances for the club before he left for Yeovil in 2008 and would have spells with Rotherham United, Port Vale, Mansfield Town, Floriana of Malta, Gap Connah’s Quay, Mosta (another Maltese team), Witton Albion, Bangor City and Southport. He is currently playing for hometown club Chester, who he signed for 2 years ago.

The Liverpudlian joined the club in the summer of 2007 from Bradford City and would make 81 appearances for the club in a 3-year spell before he left for Bury. After a similar spell with the Shakers, he would also play for Fleetwood Town, Stevenage and Southport before retiring from playing 2 years ago. He would become a first-team coach at Bury upon his playing retirement and is currently Plymouth Argyle manager, both under the management of Ryan Lowe.

Westwood was another player, like Roberts, who was given the number following a season establishing himself as a first-team player. He would make almost 150 appearances for the club, including 5 as club captain in his final month, before joining Aston Villa in August 2012. He would join current club Burnley in January 2017.

We covered Harry’s career in yesterday’s column but he moved to the number 4 after spending most of the previous season in his preferred centre-back position rather than at right-back where he started his Alex career.

The Durham-born midfielder would join the club from Hartlepool United in the summer of 2017 and would play most of his time at the Alex playing as a centre-back (where he had played a number of times for Hartlepool) before joining Wrexham on loan near the start of his second season at the Alex. He would join current club Shrewsbury Town in January 2019 and would rejoin Wrexham as he was ineligible to play for the Shrews due to a FIFA regulation that means that players cannot play for more than 2 teams in competitive action in a calendar year.

The current Fans and Players Player of the Year (as revealed at last night’s Promotion Presentation) has made almost 150 appearances for the club since joining from Alsager Town as a second-year scholar, making his debut almost 5 years ago. His form has improved since Artell moved to the 4-3-3 formation 18 months ago and he deserves his opportunity to play in League 1 next season and hopefully, he can kick on to the next level in our team once the football resumes.