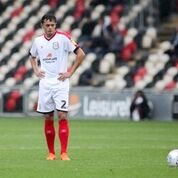 Here are those players that have worn the number 2 shirt in competitive games since squad numbers were brought into the Football League in the 1999/2000 season.

The first player on the list is Wright who made his debut for the club 2 seasons before squad numbers were introduced and made almost 250 appearances before leaving for Wigan in the summer of 2004. He went on to play for Wigan Athletic, Norwich City, Ipswich Town, Crystal Palace, Gillingham and Colchester United before retiring in 2014. Since then, he’s been at Maldon & Tiptree as manager before spending time at playing clubs Colchester and Norwich, he’s currently Under-23 manager at the latter.

Next saw the Academy product Jones following his successful debut season including his volley against Wigan early on in his career. He made almost 150 appearances for the club before moving to Preston North End and has also played for West Bromwich Albion and Sunderland before joining Rotherham United 2 summers ago and is currently considering a contract extension following their promotion to the Championship.

The third player saw Welshman Darren Moss occupy the shirt and he made 60 appearances in his couple of years at the club before he rejoined former club Shrewsbury Town. He has also played for Chester City at the start of his career, Morecambe, Bangor City, Nantwich Town and Cefn Druids and currently runs his own coaching academy.

The Liverpudlian joined the club on loan during the 04/05 season while at his boyhood club Liverpool before he joined Rotherham United at the end of that season. He would join the Alex in January 2006, becoming a regular in the back 4 as we looked to avoid relegation from the Championship as he made exactly 50 appearances in all competitions in his permanent spell with the club. After leaving the Alex in the summer of 2007, he spent time with Norwich City, Southampton, Sheffield Wednesday, MK Dons and Tranmere Rovers on loan before retiring from the game in 2014.

Former Chelsea youngster Woodards joined from Exeter in the summer of 2007 and spent 2 years at the club, making almost 100 appearances in defence and as a midfielder under Gudjon Thordarson. Since leaving the Alex, he spent time at MK Dons, Bristol Rovers, Tranmere Rovers before joining current club Boreham Wood in 2015.

John was the next player to wear the number 2 having been given the captain’s armband under Thordarson. Another player who played almost 100 appearances in 2 seasons at the club, he made the PFA Team of the Season for this season, before spending time at Cardiff City and Sheffield United. He currently is club captain at Burton Albion where he rejoined his first club in the summer of 2017.

The popular Scouser came through the Academy and would be a regular in his 6 seasons as a first-team player and was a key member of the squad as we would win twice at Wembley in the play-offs and the Football League Trophy. He would also captain the side in his final season at the club and since leaving in the summer of 2015, has played at Shrewsbury Town, Notts County and Chesterfield and is now a free agent following his deal at County not being renewed.

Another academy product Turton is the penultimate player on this list who made almost 200 appearances in his 7 years as a first-team player. He is currently a free agent after spending the last 3 seasons at Blackpool.

The current club captain made his debut for the club in 2015 and is another that has made over 150 appearances for the club following a loan spell at Hyde United in the 14/15 season.