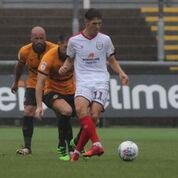 The visitors took the lead in the 25th minute with one of their centre-backs turning in an inswinging corner at the back post after Richards was blocked off by a number of bodies before Sass-Davies would head home a free-kick from Ainley from 12 yards out with 25 minutes to play.

The provider turned scorer minutes later, guiding a header into the bottom corner from a McFadzean cross from the left before Woodcock would score with 4 minutes to play, a tap-in at the back post following good work from Finney holding off the right-back to square for the first-year scholar to score his third of the season at this level.

The next games at this level see travelling to Swansea City next Monday (2 pm kick-off) before hosting Wigan Athletic at the Alexandra Stadium on Wednesday 29th (1 pm kick-off).

QPR: Team not made public