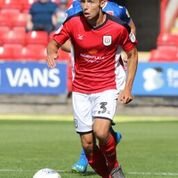 Goals from Luke Jephcott and former Alex youngster Antoni Sarcevic from the penalty spot saw Plymouth Argyle came from behind to beat Crewe Alexandra at Home Park yesterday, a result that could see the Pilgrims overtake the Alex on Tuesday night into the top 3.

Manager David Artell made one change from Tuesday night’s 2-1 home win against Crawley Town as Paul Green came into the team for Oliver Finney, who dropped down to the bench. Former Alex Academy youngsters Sarcevic, George Cooper and Byron Moore all started for the hosts while Joel Grant and namesake Conor (who spent half a season with the Railwaymen) were on their bench.

The Alex were denied a penalty shout on 9 minutes with Stephen Walker going over a challenge from Kyle McFadzean, which if given would have been a little soft, before a low cross from James Jones was almost found Green.

The visitors took the lead (and briefly led the table as Swindon’s game against Scunthorpe United was postponed) with a decent passing move that saw Pickering curl the ball past home keeper Alex Palmer into the top corner before the hosts would level 5 minutes later with Jephcott heading home from close-range.

Chris Porter would miss an open net on 66 minutes after pressure saw McFadzean under-hit a back-pass to Walker who rolled in for his strike-partner to skew wide of the goal. That miss would prove costly with Danny Mayor going over Perry Ng’s challenge allowing Sarcevic the opportunity to beat Will Jaaskelainen from the spot which he took. Pickering would hit the post with an effort in stoppage-time but the Pilgrims will be happy to move to within 2 points of ourselves.

Our next two games see us host Macclesfield Town next Saturday before a trip to Morecambe the following Saturday.

That taking chances against the better teams in the league are important and making sure that you deal with the threat of the ball into the air from wide areas.

I don’t need to go on about penalty shouts (Artell’s already had his say) and maybe we were unlucky with those but Porter’s miss was an absolute sitter that he would bury 99 times out of 100 and if Will had come out and claimed the cross for their leveller then maybe we could have won the game on another day.