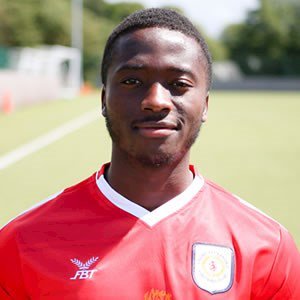 Shrewsbury Town have completed the signing of Telford United forward Daniel Udoh on a 2-year deal for an undisclosed fee, becoming their second signing of the week following the arrival of defender Ethan Ebanks-Landell from Wolverhampton Wanderers.

Udoh, 22, started his career with Stevenage with spells Worcester City, Hoddesdon Town and Ilkeston before moving to Crewe Alexandra in March 2016. After struggling to play regularly for the Alex where he made 15 appearances during Steve Davis’ management, he was unable to get into Dave Artell’s plans (being loaned out to 4 clubs in the process) and was released last May with the Bucks picking him up later in the summer.

What can they expect from Udoh?

He’s a player that played fairly well for Alex Morris’ Under-23 team but couldn’t quite convince the management that he could make the step to do first team level. He’s a hard-working forward who is a decent finisher at non-league level but it’ll be interesting to see whether he can make the jump required to succeed 3 leagues higher.

It’s a similar move to Academy Alumni striker Jason Oswell (moving from the sixth tier to Morecambe last summer, he later moved to Wrexham in January) with both players getting 20+ for their sixth tier clubs before moving back into the Football League.