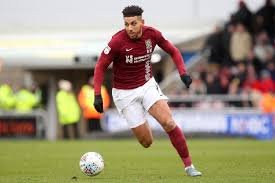 A goal in each half for Daniel Powell and a first goal for the club from Offrande Zanzala were not enough for Crewe Alexandra to defeat Shrewsbury Town at the Alexandra Stadium yesterday evening, thanks to Tottenham Hotspur loanee Shilow Tracey’s brace and first-half goals from Matthew Millar and Ryan Barnett, as the Shrews topped the EFL Trophy group.

Manager David Artell made nine changes from Saturday’s 3-2 win at Bolton Wanderers with Dave Richards coming into the team in goal, Travis Johnson, Olly Lancashire, Eddie Nolan and Rio Adebisi (the latter two making their first appearances of the season), in midfield Regan Griffiths made his first-team debut alongside Callum Ainley and Oli Finney with Owen Dale and Powell playing either side of Zanzala.

The opening chance of the game came in the 11th minute with Zanzala missing the target from the edge of the area before the visitors took the lead with a header from Matthew Millar from Barnett’s cross on 17 minutes. The provider would turn goalscorer 7 minutes later following a poor punch from Richards before Powell reduced the deficit on 34 minutes via the post from Griffiths’ through-ball. The teams would be level by the break with Powell’s left-wing cross headed on by Adebisi and turned in inside the 6-yard box by Zanzala.

The Alex would take the lead on the hour-mark after good work from Zanzala allowed Powell to round goalkeeper Harry Burgoyne before Tracey would get his first with 15 minutes to play after he beat Nolan for pace to lift the ball over Richards. The winner came with 9 minutes to play after Richards parried a strike from Sean Goss into the path of Tracey before Powell almost completing his hat-trick a couple of minutes later but he hit the post.

The next games for the Alex see us host Peterborough United on Saturday before a trip to Oxford United (maybe to play the game finally) next Tuesday night.

Disappointing that we didn’t top the group (which would have led to facing a second-placed team in the next round) but it was good to see a number of fringe players, including Griffiths making his debut, get valuable minutes in the first-team and play themselves into contention for the forthcoming league games.