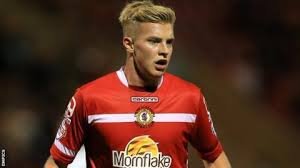 Peterborough United have announced the signing of Swansea City midfielder Adam King on a 6-month loan this afternoon. The former Scotland Under-21 international midfielder becomes manager Steve Evans’ 10th signing of the summer as he tries to rebuild his squad for a shot at promotion towards the Championship.

King, 22, started his career in his homeland at Hearts (including making his debut at the age of 18 against Celtic in the Scottish Cup) before joining Swansea in the winter of 2014 for an undisclosed fee. He joined Crewe on loan 3 seasons ago on a similar deal to this one before spending time at Southend United 2 years ago and Mansfield Town (spending time under Evans’ management for a short spell) for the second half of last season.

He joins defender Colin Daniel and fellow midfielders Anthony Grant, George Cooper and Brad Inman on the books of the Posh that have also represented Crewe in the past.