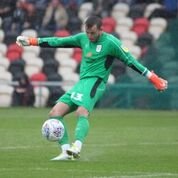 A goal in either half from Josh Mumbongo gave Burnley the win in the Under-23 Professional Development League game at the Alexandra Stadium this afternoon. Ne-Jai Tucker would add the second goal for the Clarets, who also hit the post late on, while Connor Heath came closest to scoring for the Alex who didn’t create a great deal.

Manager Alex Morris named Dave Richards in goal as captain with a back 4 of Travis Johnson, Oliver Southern, Ollie Lancashire and Sam Finley. In front of them were Joe Robbins with Heath and Nathan Woodthorpe in midfield while Owen Dale and Tyreece Onyeka either side of Chuma Anene up front. On the bench were goalkeeper Andy Walklate, Daniel Lokko, Jakob Priestman, Jack Goodrich and Matty MacDonald.

The opening goal of the game came just before half-time with left-back Ali Koiki getting into the area to pull the ball back for Mumbongo to score from just outside the 6-yard box while Heath would miss the Alex’s best chance on the hour as his lob over keeper Lukas Jensen would land on the roof of the net. They would double the lead with 10 minutes left to play with Tucker curling the ball in from inside the D, substitute Chris Conn would hit the post before Tucker would set up Mumbungo for his second and his team’s third just before the final whistle.

The next couple of games are a trip to Wigan Athletic next Monday and a trip to Charlton Athletic on Friday 27th March.