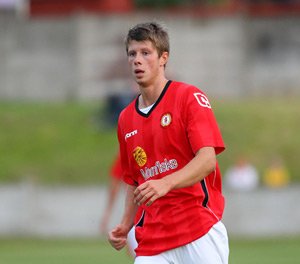 Morecambe have announced the signing of former Crewe Alexandra youngster Jason Oswell from Stockport County on a 2-year deal, the club confirmed earlier. His Football League debut for the club could come against Crewe on the opening day of the season.

Oswell, 25, started his career with the Alex without making a first-team appearance but had loan spells at Market Drayton Town, Nantwich Town and Rhyl before being released by the Railwaymen in 2012. After spells playing in Scotland for Inverness Caledonian Thistle, in Australia for Leichhardt Tigers and Northern Premier League clubs Nantwich and Witton Albion, he settled in Wales with Rhyl and Airbus before a 3-year spell at Newtown which ended last summer.

Although he ended up with 29 goals in 47 appearances for the Hatters, he scored 21 of those pre-Xmas so it’ll be interesting to see whether this will affect him after moving 2 divisions higher.

He joins fellow striker Vadaine Oliver in the Shrimps squad.