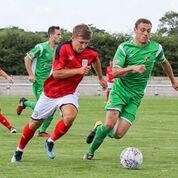 Crewe Alexandra have announced that central midfielder Regan Griffiths has signed a new 2-year deal with the club, his previous deal was set to expire at the end of this month.

Griffiths, 21, has been with the club since he was young and made his first-team debut in November in the EFL Trophy against Shrewsbury Town and would go on to make 3 more appearances in the following few months. He would be loaned out to National League side Notts County for the final few months of the season, where he made 12 appearances as the club made the semi-final stage of the playoffs before losing to Torquay United last Saturday.

He had also spent time on loan at Kidsgrove Athletic and Witton Albion in 2020.

He’s another player that is looking to make a breakthrough to become a regular first-team squad member. I think it’ll be a case of him going out on loan early next season and playing in the EFL Trophy games (something that can happen if he joins a National League club) and keeping an eye on his progress from there – whether we use him in our first team for the second half of the season or look at maybe a League 2 loan from January onwards.