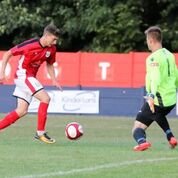 Shaun was not involved for Morecambe in either of their games this week, a 1-1 home draw against Mansfield Town on Saturday and a 2-0 home win against Macclesfield Town last night.

This season – 18 league appearances (21 in all competitions), 2 goals (both league).

Josh played the full game in both games this week, a 1-1 home draw against Kettering on Saturday before 3-2 defeat at Spennymoor Town last night.

Billy played the full game in their 3-1 home win against Witton Albion on Saturday.

Aaron was not involved in their 4-1 win at South Shields on Saturday.

Ethan played the full game in their 4-0 home defeat against 1874 Northwich on Saturday with Hanley playing again tonight.

This season – 4 league appearances (not including tonight’s game)

There was no game for Whitchurch this week as their game against Longridge was postponed with the opposition involved in the FA Vase instead on Saturday.

Jamie was not involved in their 4-1 home defeat against Cheadle Nomads on Saturday.