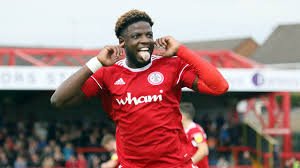 Crewe Alexandra have confirmed that forward Offrande Zanzala has left the club by mutual consent.

Zanzala, 24, arrived in the summer on a free transfer from Accrington Stanley, signing a 12-month deal with the option of a second year, but found it hard to break into the team, having started just one game in the league away to Portsmouth. He would also make start in all 4 EFL Trophy games this season, scoring in the final group game against Shrewsbury Town.

It leaves us a little short in the central striker options, especially if we wish to change formation to one that has 2 central forwards, with Mika Mandron and Chris Porter being the natural options.

Having only played 466 minutes in all competitions (two-thirds of which were in the Trophy), it’s not a shock that his contract wasn’t going to be extended at the end of the season but it’s a little surprising that he’s left on a permanent deal rather than be loaned out for the rest of the season.