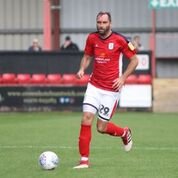 Crewe Alexandra have confirmed the extension of the contract of defender Nicky Hunt, whose contract was set to expire this summer, that will see the former Premier League player stay for another season. He becomes the second player, after Paul Green, to sign a 12-month extension with the club over the last few weeks.

After making his debut on the opening day victory over Morecambe, he made 25 appearances in all competitions for the club this season and also has 9 caps for England at Under-21 level.

What does this mean for the Alex?

Like Green, he’s another player that has come in and his experience has helped the younger players in the team due to his constant talking throughout the game and being able to read the game well enough that his lack of pace is rarely a problem.

Whilst he has been in and out of the side, he has deputised both at full-back and centre-back whenever he’s been called upon and I’m delighted that he’ll be around the squad for the next 12 months.