Former Alex Players On The Move On Deadline Day 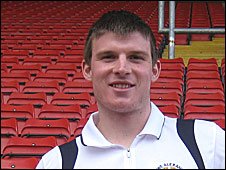 Former Crewe Alexandra players Matty Lund and Chris Stokes have moved on Transfer Deadline Day with both players joining clubs that they have played for before.

Lund, a graduate of the Alex Academy system (and a player that is featured in the Academy Alumni updates), has moved from Scunthorpe United back to former club Rochdale and back into League 1 football. He’s signed for the Dale on an 18-month deal with his new club sitting in 18th place, sitting 7 points ahead of Tranmere Rovers in the first relegation place.

Stokes, who played for the Alex on loan from Bolton back in 2010, has joined Forest Green Rovers with a deal until the end of the season from fellow League 2 club Stevenage. He spent 4 years in his first spell at the New Lawn and joins as his new club sits in 9th place, just a single point outside of the playoffs currently. He could feature in FGR’s game at the Alexandra Stadium in March.