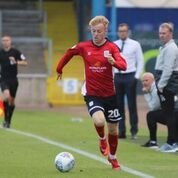 Goals in either half from Charlie Kirk, on his 150th appearances for the club, and Daniel Powell saw Crewe Alexandra defeat Leyton Orient at the Alexandra Stadium last night.

Manager David Artell made 3 changes from Saturday night’s 2-2 draw at Scunthorpe United as defender Luke Offord coming in for his full debut, Paul Green returned to the midfield while Kirk started on the left. Going out of the team were Callum Ainley and Tom Lowery, who both dropped to the bench, and Nicky Hunt, who has a slight hip injury. Young midfielder Regan Griffiths would also make his first appearance in the matchday 18 for the Alex.

The Alex took the lead in the 2nd minute with the ball played back to Sam Sargeant in the visitors’ goal who slipped and allowed Kirk to roll the ball into an empty net. After another couple of shots from Kirk had Sargeant at full-stretch the game went into a bit of a lull with Will Jaaskelainen making a couple of saves with a shot from distance then denying Conor Wilkinson from a tight-angle.

After the ball ended up in the net seeing a potential equaliser ruled out for offside, it was Kirk tormenting the stand-in full-back George Marsh with the O’s player receiving a yellow card. In trying to get back into the game, forwards Lee Angol and Matt Harrold were brought off the visitors’ bench before an individual effort saw Powell double the lead with 2 minutes to play as he beat multiple defenders with his effort beating Sargeant at his near post.

Our next two games see a trip to Walsall on Saturday before hosting Oldham Athletic the following Saturday.

People say that it’s the sign of a good team to pick up points (and more specifically wins) when not playing well and that’s exactly what happened. The opening goal pretty much sums the game up – pressure put on by the team out of possession forcing a mistake and Kirky taking full advantage of that to pick up his 7th of the season to go with his 11 assists.

The second was a big contrast to that and really out of the norm for the game, although it did come with a little bit of luck with how Powell got through, with a good patient passing sequence that we didn’t see much of last night.

That said, I’d rather have that combination than playing well and not winning.