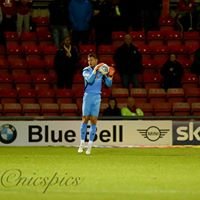 Crewe Alexandra have announced that they have extended the contracts of goalkeeper Dave Richards and forward Owen Dale on the official site.

Richards, who joined the club in the summer of 2015 from Bristol City, has made 14 appearances for the club since making his debut against Coventry City back in September and has signed a 1-year extension with an option of a second year.

Dale, who can play as either a central forward or from a wide position, has made 6 appearances for the Alex first team this season following his debut in the EFL Trophy against Newcastle United`s Under-21 team in August after coming through the club`s youth system. He has spent the last 5 months on loan at Northern Premier League side Witton Albion where he has been gaining experience of senior football and has signed a 2-year deal with the option of a third year.