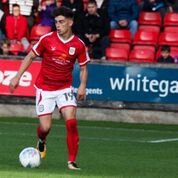 A brace from Owen Dale saw Crewe Alexandra get their first-ever point against Charlton Athletic at the Valley last night after Jayden Stockley and Alex Gilbey had both given the hosts the lead.

Manager David Artell made three changes from Saturday’s 2-2 home draw against Rochdale with Nathan Wood returning to the defence, Ryan Wintle came into the midfield and Dale starting in the front 3. Dropping out of the team are Olly Lancashire and Chris Porter, who both were substitutes, and Luke Murphy who missed out through injury while former Alex loanee Chuks Aneke was a substitute for the hosts.

The opening chance and goal of the game came in the 10th minute with Gilbey getting in behind Rio Adebisi with Stockley heading his cross in off the post before the visitors’ first effort coming from distance by Ryan Wintle following a Charlie Kirk corner being cleared after 26 minutes.

The first equaliser came midway through the second half with Tom Lowery’s through-ball finding Dale , who cut in from the right before curling the ball past Ben Amos before the Addicks would regain the lead with 7 minutes to play with a left-footing, inswinging corner headed back by Akin Famewo with Gilbey heading in from 6-yards out. The second equaliser came deep into stoppage-time with Chris Porter’s knock-down controlled then volleyed in by Dale from around the penalty spot.

The next games for the Alex see us travel to Bristol Rovers on Saturday before hosting Shrewsbury Town a week on Sunday.

For all of the complaints on social media over the past few weeks regarding a lack of application and commitment, that cannot be said about this game with us having the better of a team that could end up in the play-off positions in a fortnight’s time.

Dale’s becoming a vital part of the forward line that has added goals to his game (and some really good ones at that) and has shown great composure with his two goals tonight.