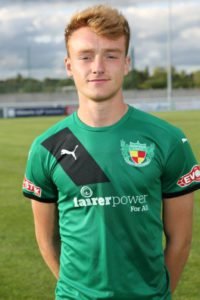 Chester FC have confirmed that they have signed former Crewe Alexandra youngster Jon Moran on a 1-year deal following his release by Forest Green Rovers, the club announced yesterday.

The central defender, 21, came through the Alex academy without making an appearance before joining Nantwich Town initially on loan in March 2015 then joined permanently in that summer. After a year with the Dabbers, he moved on to then-National League side Forest Green where he gained some experience on loan at Altrincham and Weston-super-Mare but hasn’t made an appearance in first-team football since January 2017.

He joins former midfielder Gary Roberts at the Deva Stadium.