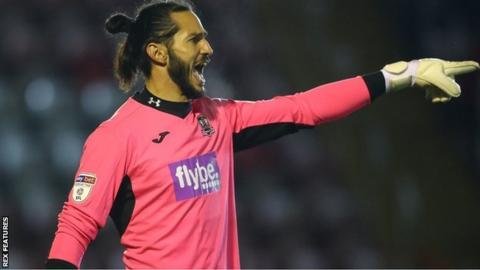 Crewe Alexandra have announced the signing of goalkeeper Dino Visser on a short-term contract until the end of the season and he will wear the number 31 shirt for the rest of the season.

Visser, 30, has played in his native South Africa for most of his career before joining Exeter City on a similar deal in October. Despite not playing in the league for the Grecians, he made a couple of games in the EFL Trophy (including a round of fixtures where he was named Player of the Round) but was an unused sub for 8 games in October, November and December before being left out of the squad from mid-December to the end of his deal.

He joins the club with the potential that Jaaskelainen going to play for Finland’s Under-21 side at the end of the month as well as an injury picked up by 3rd-choice Sam Booth.

What are we to make of the signing of Visser?

I’m going to be honest and say that I’ve never heard of him but the signing could well be looking more towards next season with both Dave Richards and Booth out of contract in the summer, similar to the Nottingham deal in playing for a potential contract next season.