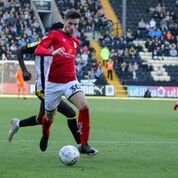 First goals of the season for Corey Whelan and Shaun Miller gave Crewe Alexandra the win at the Alexandra Stadium against a Grimsby Town side that hadn’t conceded in 4 games yesterday afternoon. This is the first time since the opening day victory against Morecambe that a league goal was scored by someone other than Charlie Kirk or Jordan Bowery.

Manager David Artell made 1 change from Tuesday night’s 1-1 draw at Yeovil Town with Nicky Hunt coming in at centre-back for the suspended Perry Ng (who had collected 5 yellow cards) with Tom Lowery making up the bench.

The game started quickly for the Alex as Callum Ainley’s second-minute cross beat the players in the middle before Miller had an effort that was saved by James McKeown in the Mariners goal. Former Port Vale forward JJ Hooper had two efforts, the second of which required Garratt to make a save before McKeown made a double save from Kirk and James Jones to keep the game goalless.

As the game went towards half-time with Garratt denying Wes Thomas who had got away from Hunt before Garratt also denied Mitch Rose on the stroke of half-time. Into the second-half where the pace of the game continued. McKeown saved Ainley’s shot from the edge of the area before Garratt made another decent save from Charles Vernam a minute later.

With 20 minutes left to play it was the Alex who took the lead with Kirk’s cross-field ball controlled and finished well by Whelan, the on-loan Liverpool defender getting his first career league goal (he scored one for Yeovil in the EFL Trophy last season), before a second was added 7 minutes later as Ryan Wintle’s cross was headed in by Miller from around the penalty spot. A third was almost added just before the end of the game as McKeown tipped an Ainley drive onto the bar but a well-deserved win for the hosts sees them get their 5th clean-sheet from 7 home games and a chance to move into the top half of the table in mid-week.

The Alex host Mansfield Town in the re-arranged game from September’s international break on Tuesday before a trip to Northampton Town next Saturday.

This was precisely the result we needed after collecting 4 points from the two away games this week. Garratt making a number of saves, key ones either side of the half-time break, and getting Miller’s first of the season could start him off on a run of scoring.